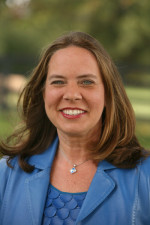 Born and raised in Daviess County, Suzanne Miles’ roots in the community run deep. In the late 1950s, Suzanne’s father and grandfather started selling seed off their back porch, an undertaking that would eventually develop into Miles Farm Supply. When Suzanne was four, she got her first job – counting quarters from the Pepsi machine at one of the stores. While a student at Apollo High School, Suzanne worked after school and during the summers at her family’s business.

Suzanne adopted her family’s entrepreneurial spirit and work ethic. During her senior year at Transylvania University, Suzanne became a small business owner when she purchased a clothing store in Owensboro. Two days after graduating college, Suzanne began working at Town & Countrywear Ladies Clothing and Accessories, which she owned and operated until 2008.

Since 2009, Suzanne Miles has worked as a field representative for Congressman Brett Guthrie whom she considers a mentor and a friend. The most important and the most fulfilling aspect of her job is when Suzanne meets with constituents who need help with issues they may have with the federal government. Suzanne works with Congressman Guthrie to provide constituents with the services, support, and help they need.

A member of Panther Creek Baptist Church, Suzanne Miles understands the value of community and what it means to work hard on behalf of customers and constituents. Suzanne will bring that experience and tireless work ethic to the Kentucky State House of Representatives as she serves Daviess, Henderson, and Union Counties.

Let us know your thoughts!